Well, to celebrate a happy appointment today, I decided to be BAD! I wanted to indulge a little…. Chocolate, coffee, coconut….. You know what I’m talking about… Velvety deliciousness. Am I saying these things out loud on a diabetes blog?? 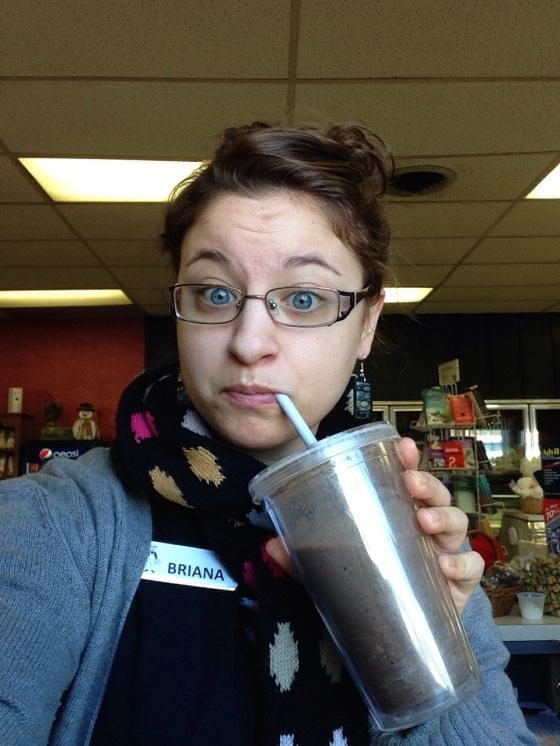 My delicious Treat was inspired by the Trim Healthy Mama book that I have mentioned before. It was only 7 carbs and completely delicious! Keifer, Whey protein powder, Hershey’s Dark Chocolate powder, ice, coconut milk, cold brewed coffee and Stevia to sweeten…. Plus a little secret ingredient called Glucomannan. When it mixes with Whey PP in my magical Ninja, it creates a frothy, fluffy deliciousness! In Trim Healthy Mama, it is suggested as a no carb thickener that can be used to make puddings, gravy, etc.. I love the addition. Best part…. Look what it did to my BG…

I have an appointment this morning.. Soon! The last time I was at this doctor, I bawled my eyes out. It’s kinda this tradition I have with the doctor’s office. Eeeeek. I hope that becomes a less visited tradition in the future. Recently, I have found that in all my spare moments–when my mind drifts at work, while I lie in bed, as I fold laundry–I have had many, many conversations with an invisible doctor. Defending myself, mostly. Telling him why I don’t need to eat 45 carbs at every meal, why I don’t write down records and fax them in weekly, why I make changes to my pump (little ones) without consulting them. I explain my personality and why this new approach is best. I talk about my life and how what I am doing fits better. I talk about all the small victories and lifestyle changes I have made! I do not want a “great” Dr. appointment because i turned my life upside down for three months, wrote everything down, and became a crazy diabetes nazi. My motivation has been a new and completely different lifestyle. I want a sustainable change. In my journey, it has not been writing everything down. It has been arming myself with knowledge and actually making changes. Finding things that work for my body and life and embracing them! I LOVE the pace I have taken. I LOVE the changes I have made. I also LOVE the results.

Today, I will be respectful. I will be composed. But I will not apologize for finally taking my health into my own hands and owning it! This is my everyday journey and I am really enjoying it! My health is not in his hands… It is in mine.

…..thanks for letting me get that out. I just needed to talk through it out loud one more time.

My husband is the best ever. He left this on our fridge “scrabble board” after I got my A1C results on Thursday.

I am a list person!  For me, they are energizing, profitable, and heck… just lots of fun!  This list, is not one that will be crossed off, but rather laminated and used for wallpaper in my house!

Ben and I were driving this weekend,  and he helped me come up with a list of things I have been doing lately.  I am sure I will need help to remember them!  I also hope that they will be a to other diabetics out there longing for a lower a1c reading.  Mine went from 8.7 to 6.7 in 6 months!  Big news for this “most-of-my-life-in-the-double-digits” girl!

I made lots of changes in these areas…

Not to us, O LORD, not to us, but to your name give glory, for the sake of your steadfast love and your faithfulness. Ps 115:1

This list is long and fractured, but it is some of the things that have been helpful for me recently.  I really needed to write some of them down.  The more I write, the more solidified it becomes in my heart.  I hope to continue to chronicle the journey.  I have been learning so much!  I can’t wait to share it with you!

That’s right.  In the past 3 months, this blog has seen very little attention from me.  In the case that I have been silent on this blog, one of two fundamentally opposed things are taking place.  Option 1: I have fallen off the wagon into an abyss.  In this abyss, there is lots of cake.  And with my mouth so full of cake, I just can’t find my diabetic voice.  Option 2: I am grabbing that feisty diabetic bull by the horns and can’t be bothered to write about it.

Headed into the “holiday months,” I must confess, I was extremely nervous.  Last year, I was doing well up until those pesky pilgrims came out to share their cornucopias and pie, I fell into more of a rut.  That followed through Christmas and into January.  In February, I was bitterly assaulted by a sinus infection that left me on the couch for weeks.  (The plus side of this: watching the entire first season of Once Upon a Time.)  In March, I had my blood work done, and it was horrible.  I was very discouraged, because I knew that my heart had changed so much regarding diabetes, but it was not showing up in the labs.

THIS YEAR MUST BE DIFFERENT.

I must stop Post-Christmas Blood work from coming!  …But how?

Knowing the tendency to “relax” around the holidays, I determined to make the same choices over Christmas as I had been implementing already.

My a1c is finally, for the first time in my whole diabetic existence, in a “normal” range.  For those familiar with the test, my number is 6.7.  I had not even dared to hope that it would be below the 7’s, but God’s gracious gift to me was much better than I anticipated.

Here is a little recap of the last year!

A San Francisco cable car holds 60 people. This blog was viewed about 1,100 times in 2013. If it were a cable car, it would take about 18 trips to carry that many people.

Tonight, it’s a double-feature: Star Trek, and Star Trek: Into the Darkness.   We had a plan: we were going to get a Redbox movie and a shrimp ring.  We love shrimp rings… its an occasional indulgence that isn’t too “carby.”  Not to mention delish!  Tonight, it ended up being super-de-duper expensive!  We walked from the seafood section down from the frozen section to pick up an old standby, Digiorno.  We were so close to just buying it because we just wanted SOMETHING…  reason and wallet protested, and we came home empty handed.

I remembered a pin that I had about making cauliflower pizza crust, and I decided to try it…

Here’s the link, if you’d like to give it a try: http://www.fatgirltrappedinaskinnybody.com/2011/06/basil-cauliflower-pizza/

Basically, I followed the directions exactly for the recipe.  Which is very unlike me, but I would not cook the pizza in the initial baking for as long as I did.  I would suggest maybe 12 minutes.  I also LOVED the basil ricotta!

Here’s Ben with his “slice”

Seriously people, we didn’t miss our Digiorno for a second! 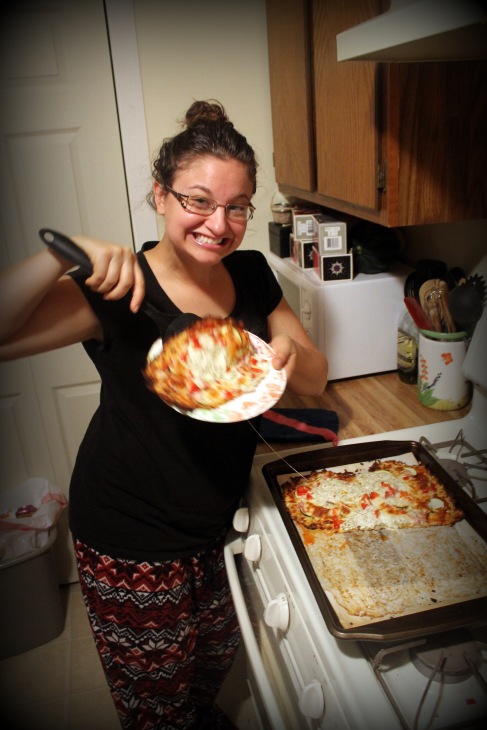 (that’s counting even the carbs in the veggies & sauce on the pizza!)

To make the comparison even more mind-boggling, and waist-whittling…

The entire cauliflower pizza, which almost filled my sheet pan, has less carbs than a slice of Digiorno.

I think the very best part is that I feel great!  And so does my blood sugar!

I have stuff to stay about...